Doe, A Deer, A Female Deer: The Spirit of Mother Christmas

A beautiful piece I came across about the Deer Mother. She is a Totem of mine and offers a powerful life giving, loving message for this time of year.

It was when we “Christianized” the pagan traditions of winter, that the white bearded man i.e. “Father Christmas” was born. And so today we no longer remember the “Deer Mother” who once flew through winter’s longest darkest night with the life-giving light of the sun in her horns.

Ever since the early Neolithic, when the earth was much colder and reindeer more widespread, the female reindeer was venerated by northern people. She was the “life-giving mother”, the leader of the herds upon which they depended for survival, and they followed the reindeer migrations for milk, food, clothing and shelter.

And from the British Isles, Scandinavia, Russia, Siberia, across the land bridge of the Bering Strait, she was a revered spiritual figure associated with fertility, motherhood, regeneration and the rebirth of the sun (the theme of winter solstice). Her antlers adorned shrines and altars, were buried in ceremonial graves, and were worn as shamanic headdresses. Her image was etched in standing stones, woven into ceremonial cloth and clothing, cast in jewelry, painted on drums, and tattooed onto skin.

Rarely portrayed on land, the reindeer was often shown leaping or flying through the air with neck outstretched and legs flung out fore and aft. Her antlers were frequently depicted as the tree of life, carrying birds, the sun, moon and stars. And across the northern world, it was the Deer Mother who took flight from the dark of the old year to bring light and life to the new. 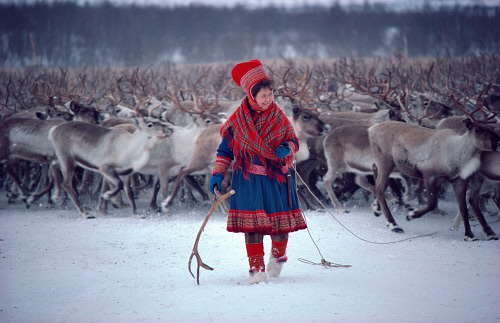 For the Sami, the indigenous people of the Nordic countries, Beaivi is the name for the Sun Goddess associated with motherhood, the fertility of plants and the reindeer. At Winter solstice, warm butter (a symbol of the sun) was smeared on doorposts as a sacrifice to Beaivi so that she could gain strength and fly higher and higher into the sky. Beivve was often shown accompanied by her daughter in an enclosure of reindeer antlers and together they returned green and fertility to the land. 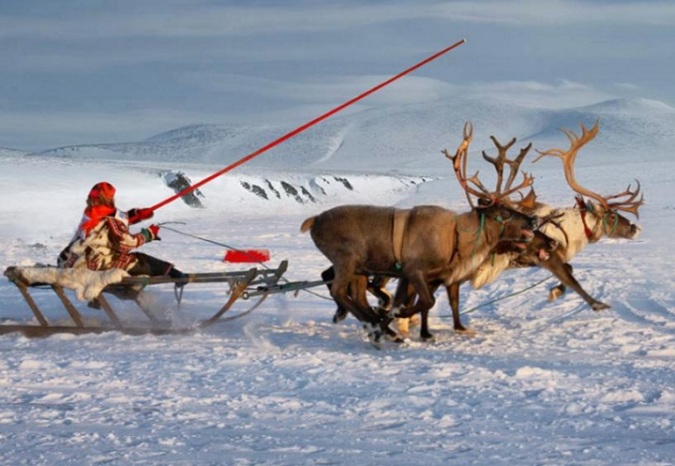 Other norther legends associated with solstice was the return of Saule, the Lithuanian and Latvian goddess of the sun. She flew across the heavens in a sleigh pulled by horned reindeer and threw pebbles of amber (symbolizing the sun) into chimneys.

Mary B. Kelly’s book Goddess Embroideries Of Eastern Europe explores images of the horned deer mother in the sacred textiles of women. The image of the mother goddess Rohanitsa is often shown with antlers and gives birth to deer as well as children. For her feast day in late December (most likely solstice) white iced cookies shaped like deer were given as presents or good luck tokens, and red and white embroidery depicting her image were displayed. 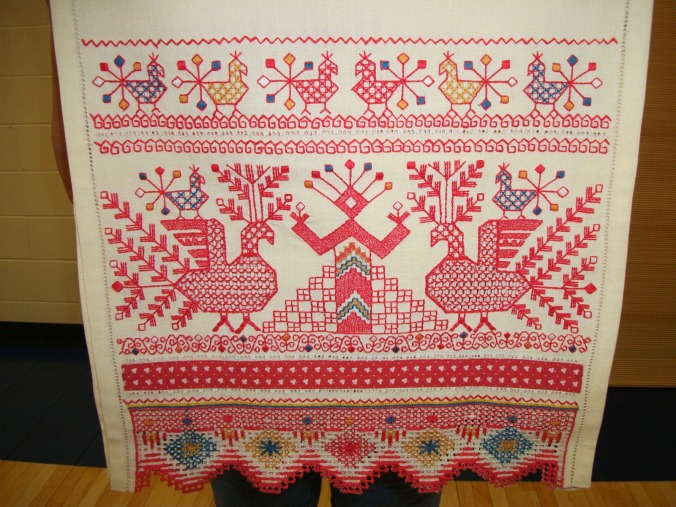 Ceremonial Embroidery of Rohanitsa, Image Source from Mary B. Kelly

In Siberian legends the reindeer took flight each winter after ingesting the hallucinogenic Amanita Muscaria mushroom, the archetypal red toadstool with white spots. Shamans would join them on a vision quest, by taking the mushrooms themselves. Climbing the tree of life in her horns, they would take flight like a bird into the upper realms. Other folktales tell how shamans, dressed in red suits with white spots, would collect the mushrooms and then deliver them through chimneys as gifts on the winter solstice. Talk about a wild night. 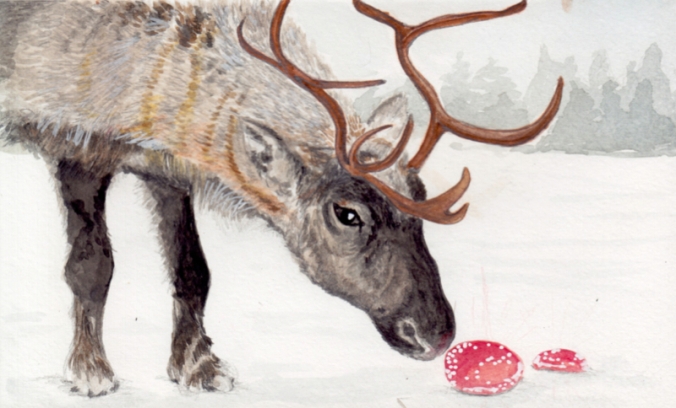 While many historical explorations of the pagan origins of Christmas observe the link between Santa’s garb and the red and white amanita mushroom ingesting shaman, few mention that is was the female shamans who originally wore red and white costumes trimmed with fur, horned headdresses or felt red hats! The ceremonial clothing worn by medicine women healers of Siberia and Lapland, was green and white with a red peaked hat, curled toed boots, reindeer mittens, fur lining and trim. Sound familiar?

Considering that most of the shamans in this region were originally women, it is likely that their traditional wear is the true source for Santa’s costume.  And it is also very likely that they were the first to take shamanic flight with the reindeer on winter’s darkest night. And while these women are largely forgotten today, the Deer Mother still lives in our Christmas cards, seasonal decorations and tales of Santa’s flying reindeer. And while we may not recognize her, I believe some deep, old part of ourselves still remembers the original “Mother Christmas” who brought light and new life to the world.

So this solstice take a moment to remember the forgotten winter goddesses of old and their magical reindeer. Look out from your warm cozy home into the cold of the darkening eve. And on the sacred night when the sun is reborn, look for the Deer Mother flying across starry skies, carrying the tree of life in her horns.